How To Make A Simple Game In Waterbear

Making a game can be hard. There’s so many pieces inside of the simplest game that trying to do it with no prior experience can be near impossible. That’s why I am making this guide. A tutorial can help you tackle this challenge. I will be making the game of pong, but if you want to make another game you can easily take the lessons here and apply it to your project.

I assume you have some familiarity with the waterbear language, enough to know where to find blocks and how to use them. I will be showing the script as I create my game.

If you are having any troubles, you can see what the end result is by clicking the Simple Pong example on the waterbear site.

In this game of pong, there will be 2 blocks on the left and right side, and a pong somewhere between them. This part we will create two blocks and a rectangle.

Start with making a player block. To make this follow these steps:

You should have the below now. Now do the same thing except for player 2.

For the pong, do the same as above except for a rectangle block, use the circle block and give it a radius of 20.

Now that you got your players and pong, you want to place them in the right spots.

To give player 1 a starting position on the left side, do the following:

For player 2, you’ll want to do the same as above except for the x coordinate. Since you want player 2 on the right side, you’ll need to grab some more blocks:

For pong, do the same as player 1 but at step 3 just use the Center point block instead. Because I want it to start in the middle. 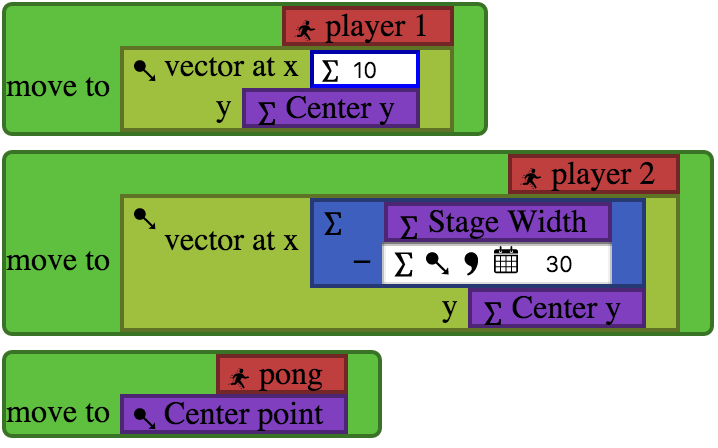 So far your script does a lot behind the scenes, but you aren’t seeing anything from your hard work. Let’s change that.

Now you can hit run and see this, 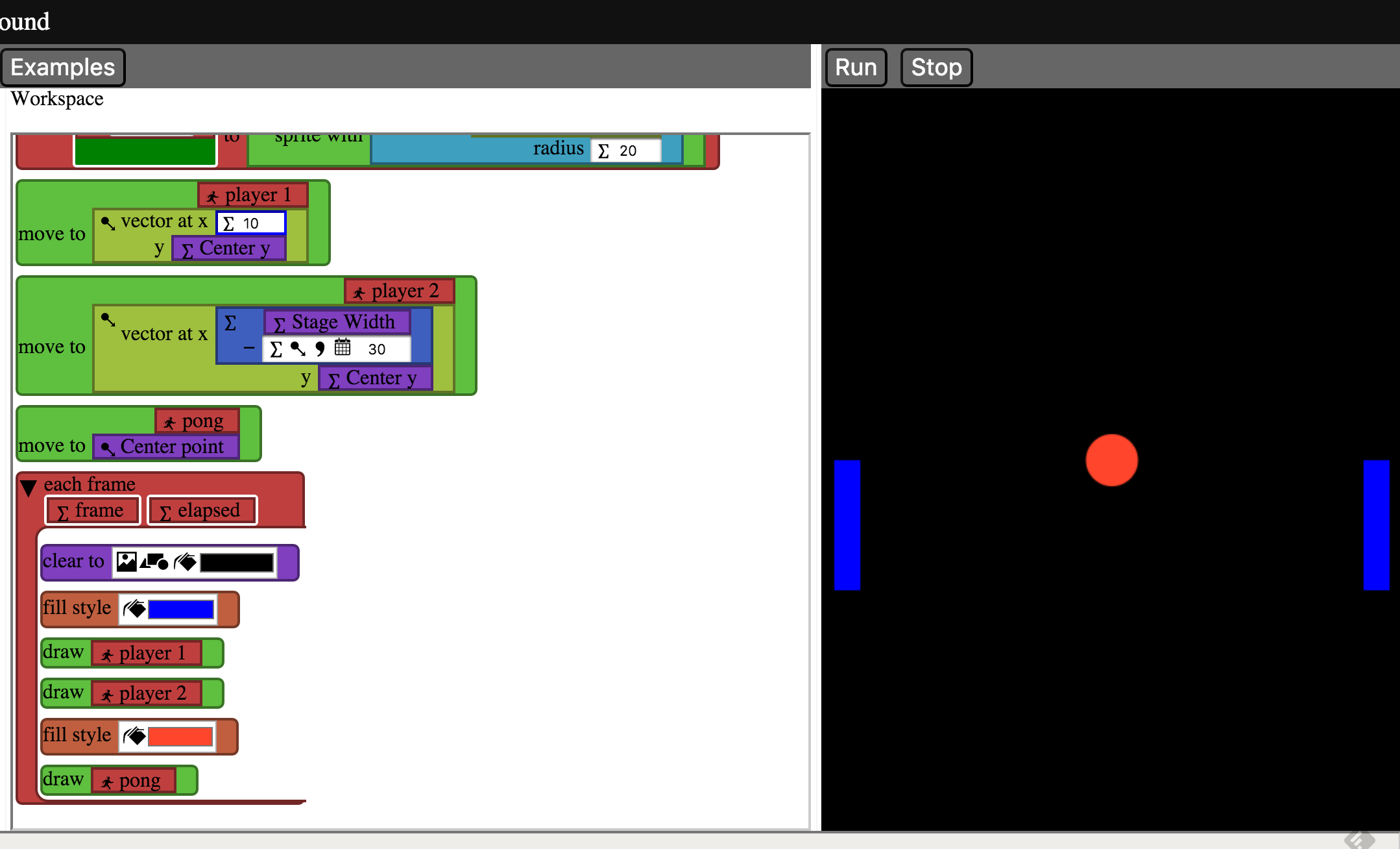 Congrats! You can see the start of your great game!

Now lets get to the fun stuff. At the moment, your game is really just a cool picture.

You have to get the pong to move around. Luckily, that’s pretty easy to do in waterbear. You’ll need three following blocks: 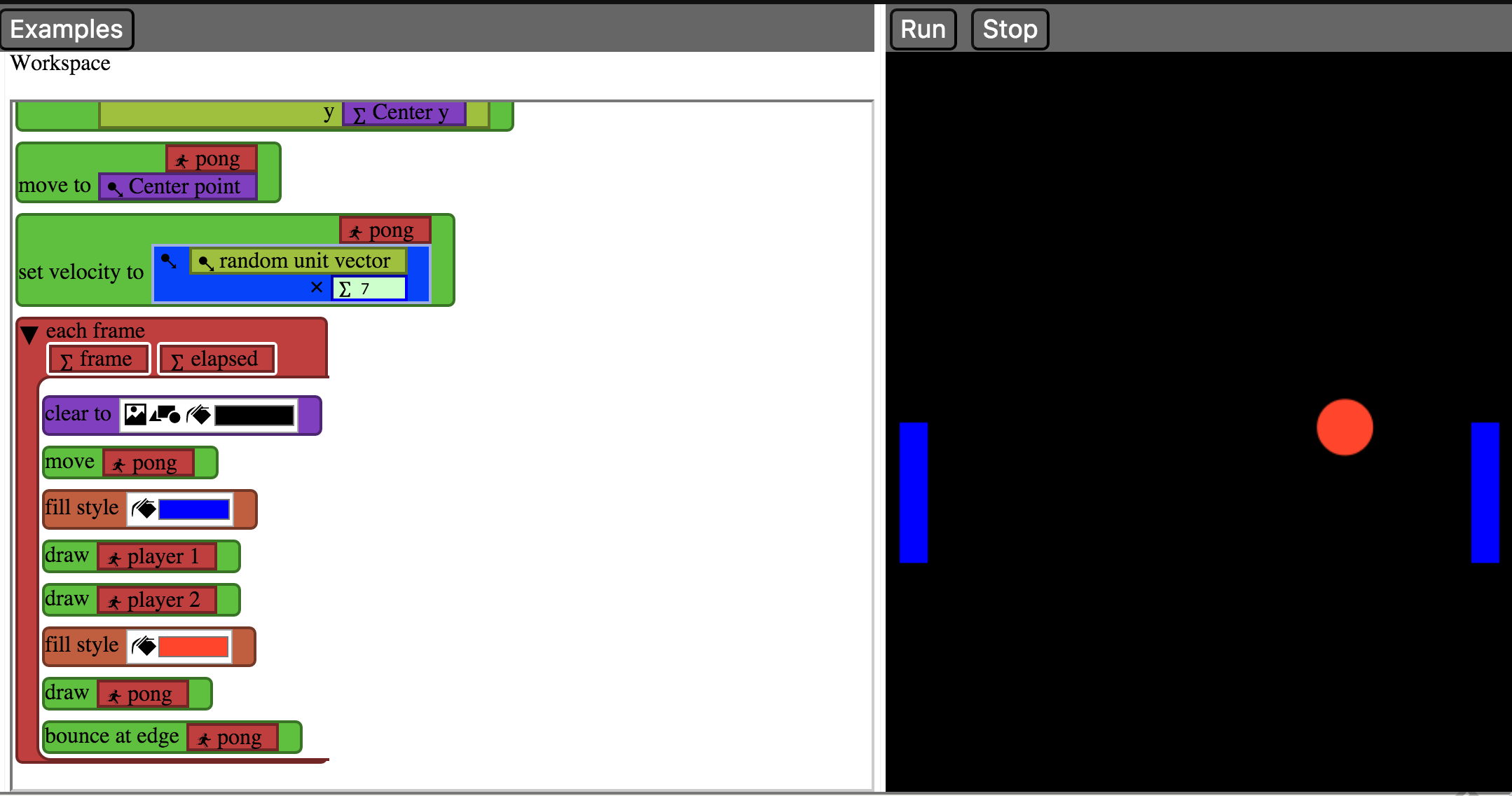 Hit run to see the pong flying all over the place!

With the pong, we can just set it’s velocity and leave it. Players are a little different. They should only move when we tell them. Luckily, there’s a few blocks designed just for that.

Now you should have these in your program. 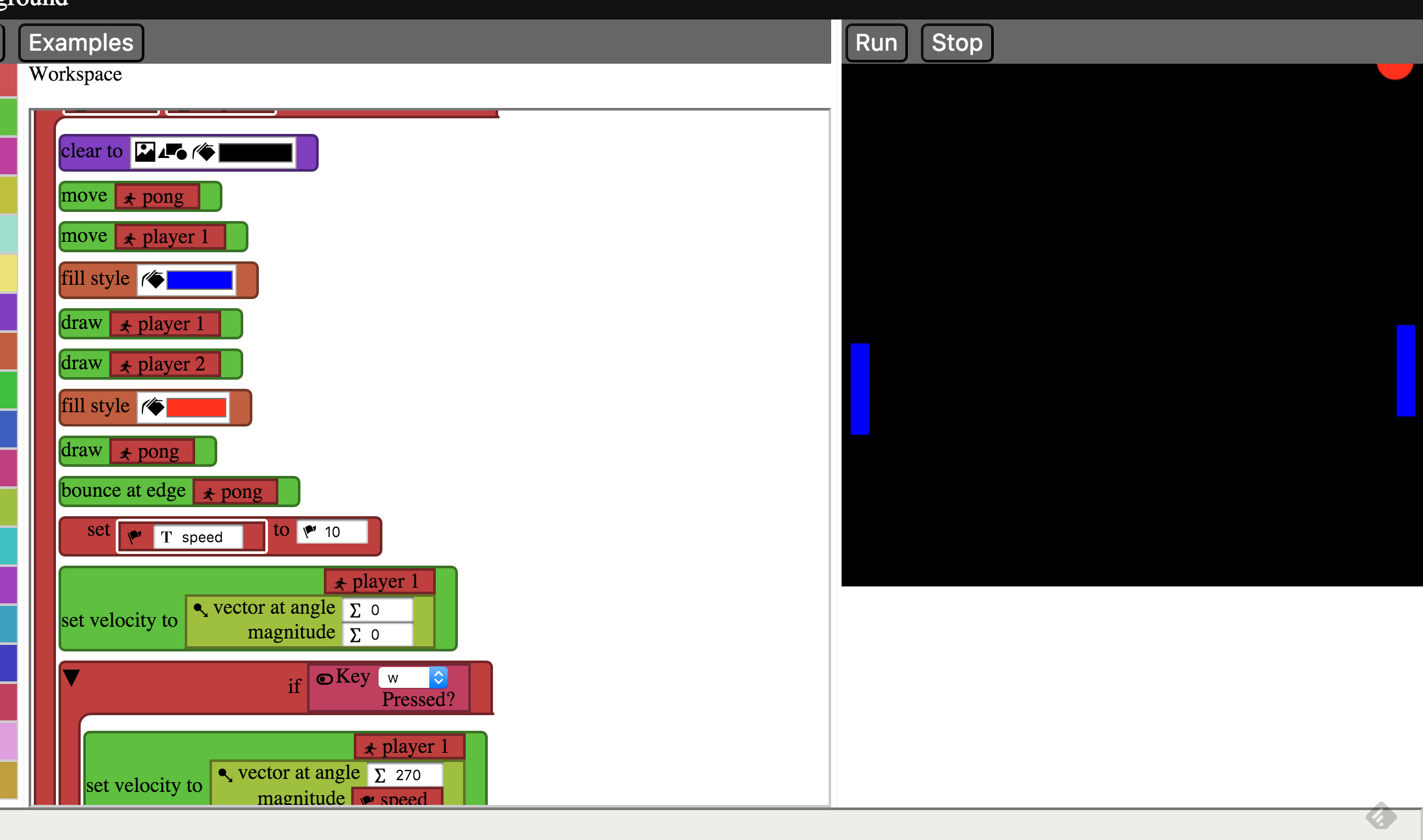 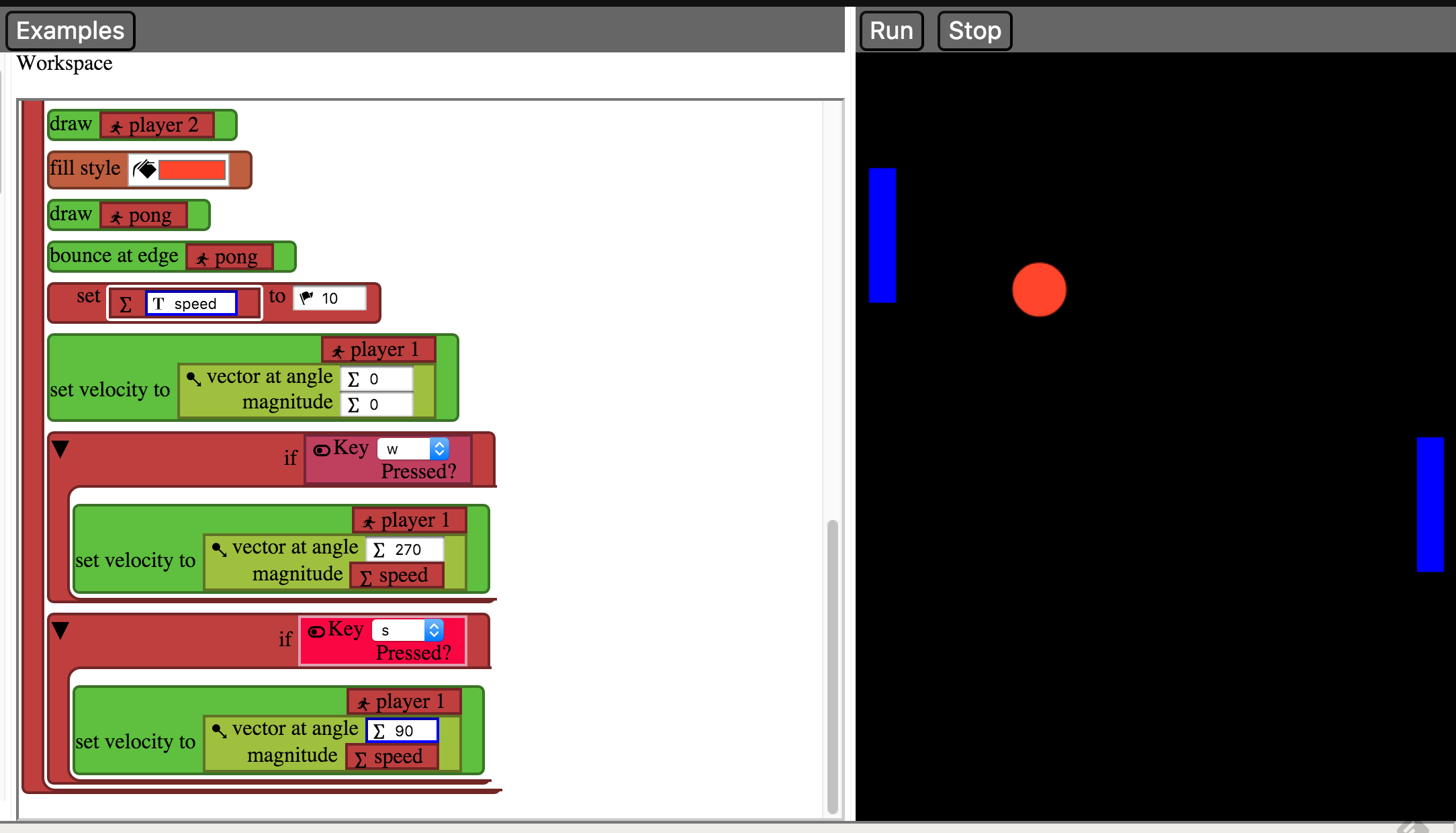 Now hit run and press w and s and see player 1 fly up and down.

You’ll want to do the same thing for player 2, but pick different keys. I used the up and down keys. 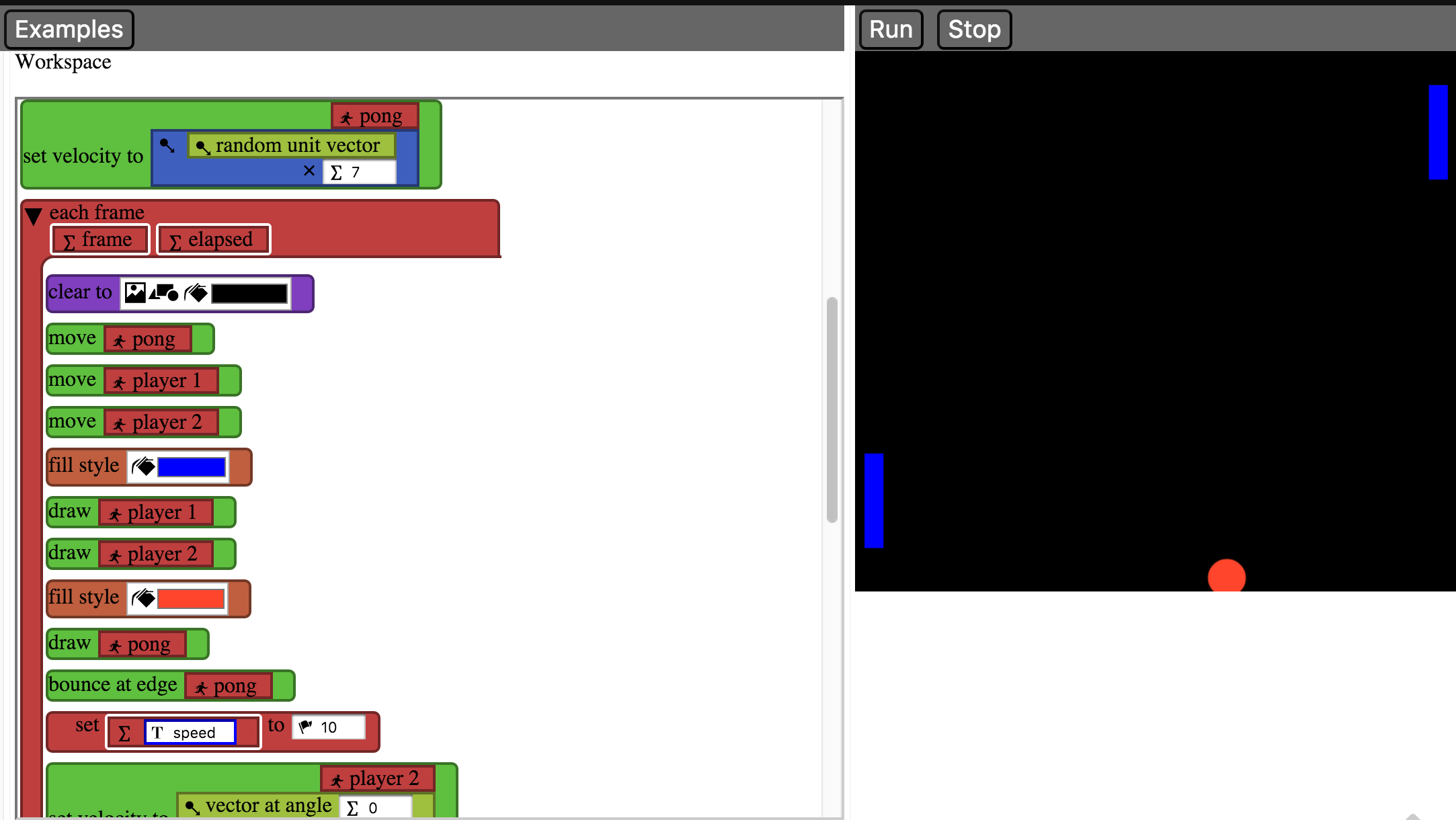 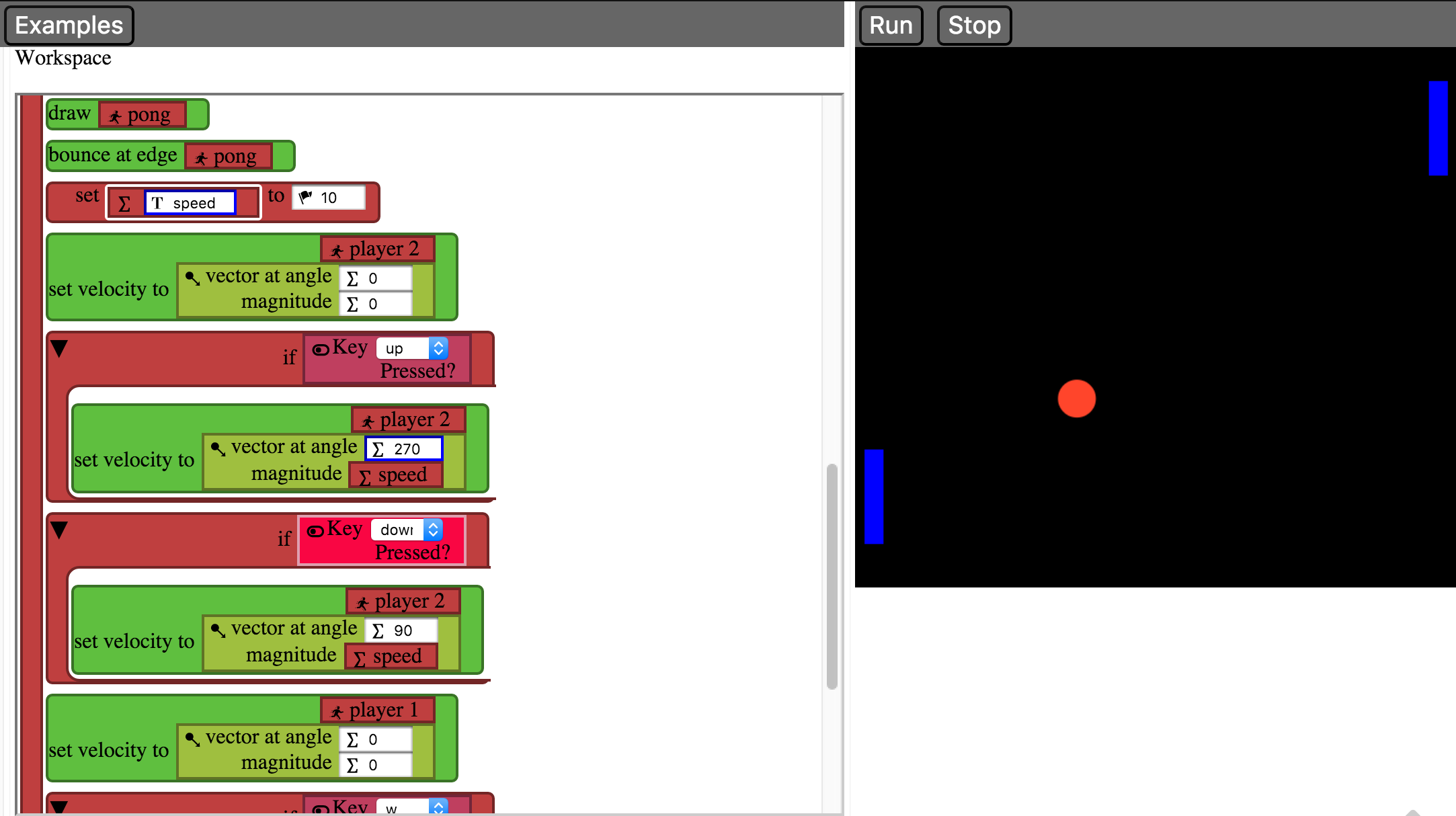 Now you got a great game that moves around, the pong goes right through the players! That’s no good. Let’s change that. In the game of pong, when the pong makes contact with the player, it should go in the opposite direction. So let’s make that happen. 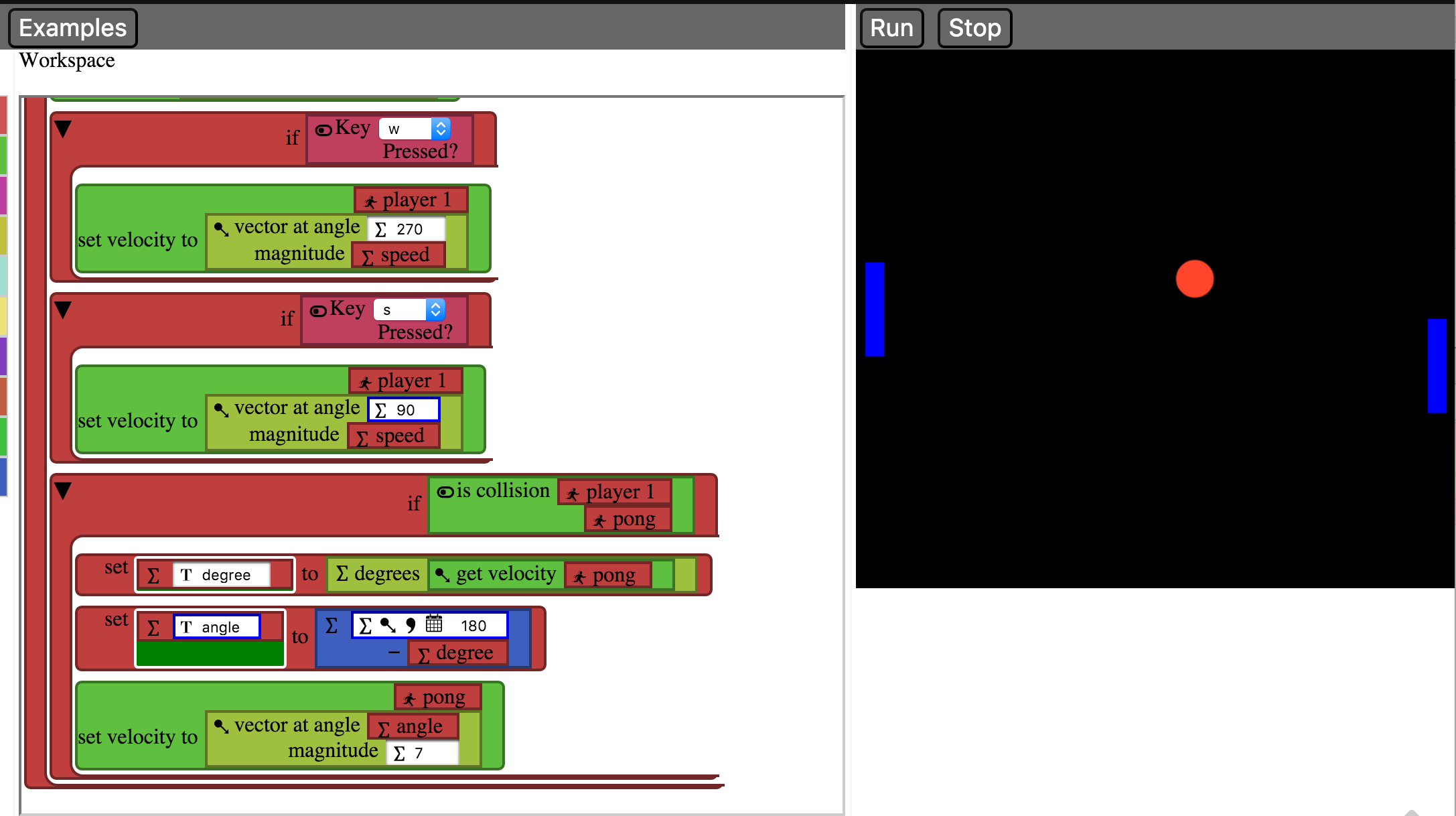 Try it out, and you’ll see that the pong doesn’t go through player 1 anymore.

For player 2, the math is the same. So it makes sense to run the same if block for pong colliding with player 1 for player 2. Instead of making a nearly identical block, just use a conditional statement. 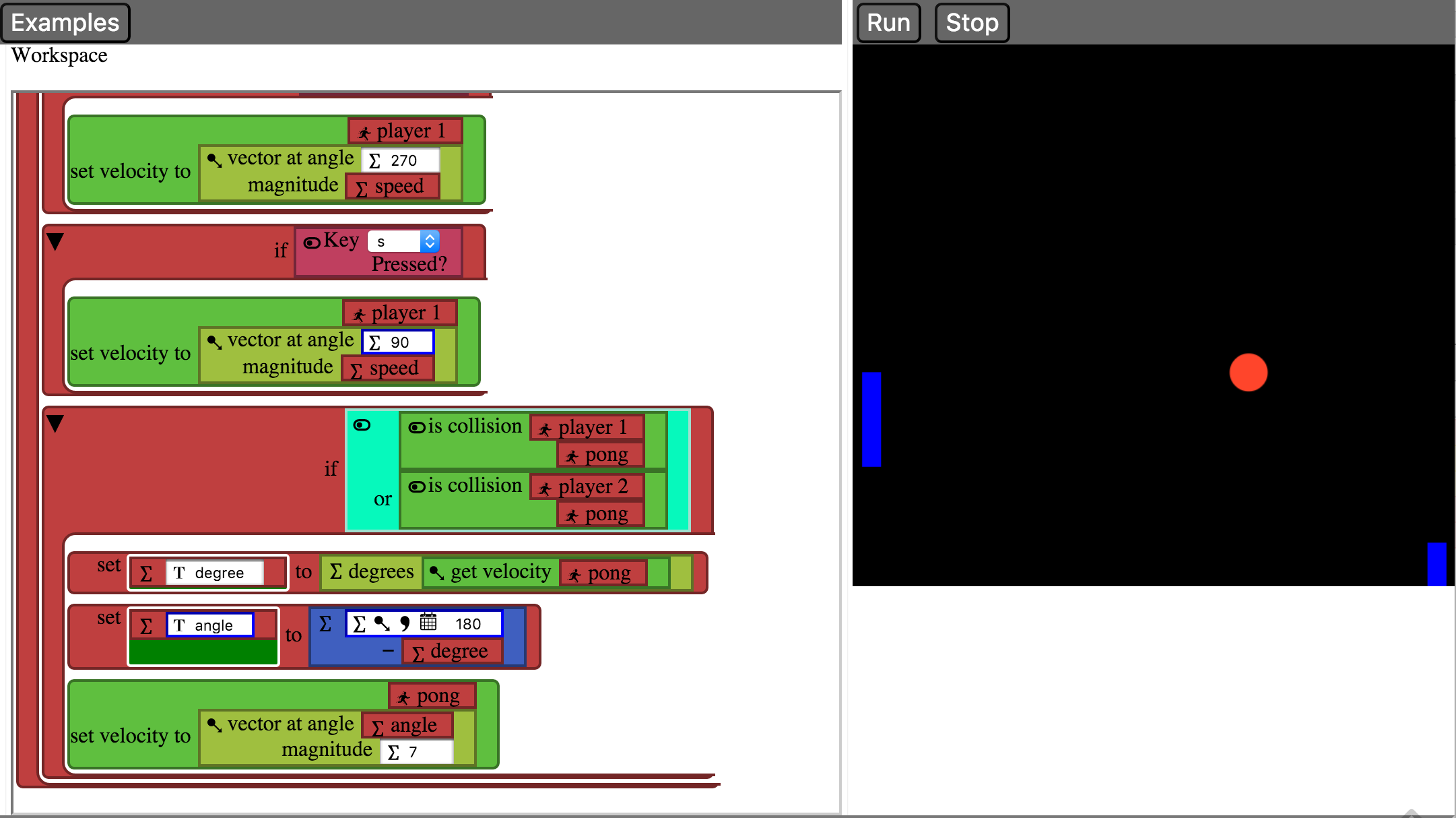 So now, collision will happen whenever the pong hits either player.

That’s it! You made your own game of two player pong!

Now the best part is that you can add your own magic to make the game even better. You can make it so that the pong goes a faster overtime. You can add a scoreboard. You can add whatever you can think of!